Home » Welcome to ACU-RITE » About Us 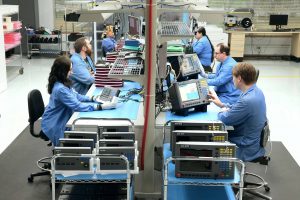 In 1994, ACU-RITE introduced the MILLPWR® 2-axis CNC Control / 3-axis Readout System — a versatile, flexible, cost-effective solution to increase the efficiency, productivity and profitability of manual milling machines. Through the rest of that decade, ACU-RITE added many enhancements to both their DRO’s and CNC Controls.

In the early 2000s, improvements to our product lines continued along with the a new version of MILLPWR to allow it to run a G-code file from CAD/CAM programs for full 3D contouring as well as ability to translate DXF files directly into program code. These added features made the MILLPWR one of the most accurate CNC milling machine controls in its class. Also the DRO’s were now available for use will mills, lathes, grinders, EDM’s, optical comparators, and almost any manual machine tool use known to the industry.

In 2009, ACU-RITE Companies Inc. were merged into HEIDENHAIN CORPORATION, of Schaumburg, IL, though the engineering and electronics production continued on in Jamestown, NY. For the next ten years ACU-RITE released new generations of DRO’s, a MILLPWRG2 and encoders. In the fall of 2019, production was moved to HEIDENHAIN’s North American headquarters in Schaumburg, IL, although engineering continues on in upstate New York.

The MILLPWRG2 has recently been expanded for use with bed mills. And, the ACU-RITE brand is proud to still be made in the USA!

What’s in your shop?

Translate »
We use cookies to ensure that we give you the best experience on our website. If you continue to use this site we will assume that you are happy with it.OkNo