SCHAUMBURG, IL (November 2015) — When it comes to seeing the actual benefits of adding a readout to a manual machine tool, often the most convincing argument is the rise in productivity due to increased utilization, output and accuracy. Jobs that might have been vended out due to a lack of time and capability can be kept in-house with a readout system. Similarly, jobs that were turned down or quoted too high in the past can be handled due to the increased capability of the shop. 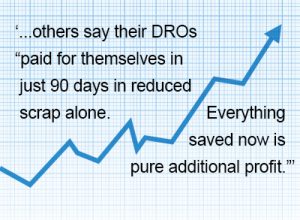 Profit centers are what some shop managers call machines retrofitted with readouts. Others say their DROs “paid for themselves in just 90 days in reduced scrap alone. Everything saved now is pure additional profit!”

It is easy to spout praises once a readout system is working for you, but how do you help the potential buyer justify the need to make that first purchase? There are at least two methods you can use to figure out the potential gains. One annual dollar savings method; the other is the purchase payback method. Both can be represented by mathematical formulas.

When these values are inserted into the formula, the result is persuasive:

As you can see, the reduced time (or increased speed) for the job with a DRO-equipped machine is enough by itself to warrant the purchase (averaging $1500). A shop working two or three shifts will increase its relative number of moves proportionately, and yield savings significantly above our $3,500 example.

When you install a digital measuring system on most machine tools, you can expect an annual return of at least 500% on your investment. The exact return in both dollars and time depends, of course on the type of machine and its usage.

Below is a basic formula which you can use for justification or a purchase.

Putting this formula to work is simple. We’ll use an investment figure (I) of $1600, the cost of installing an average system on a small mill. Using a machine revenue rate of $20 per hour (A) for and 8-hour day (B) we can assume a typically conservative increase of 25% in productivity (C).

When these figures are plugged into the formula, the result is:

Moreover, a machine utilization of three shifts per day will produce a proportionately greater return. Well worth the investment.