Home » G2 » Did you know the G2 control is used to create a popular line of tattoo machines? 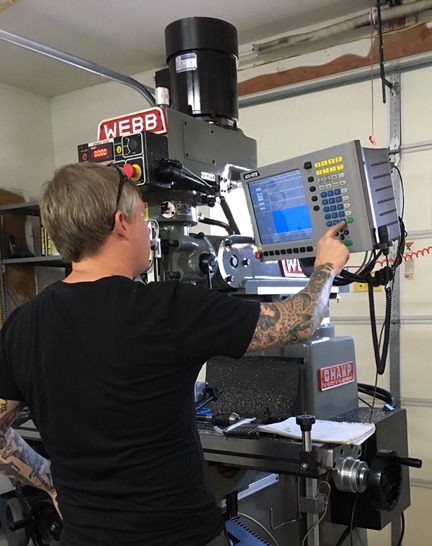 Well known in his industry, Dan Kubin is making unique tattoo machines that sell out typically within the same day he posts them on his website each Wednesday.

“I make and sell multiple models of tattoo machines, making about 50 week right now, and still have a hard time keeping up with the demand,” explained Kubin. “A couple of months ago, I purchased a Webb milling machine with an ACU-RITE MILLPWR G2 control on it from a HEIDENHAIN / ACU-RITE distributor — Accurate Measurement Systems (AMS) in St. Louis — so that I can more efficiently work on these projects.” Kubin is located in Independence, MO.

To many, Kubin’s tattoo machines are reminiscent of the Steam Punk style which embodies futuristic characteristics of an industrial era, often utilizing bright brass and copper. “If it is Steam Punk, that is unintentional. All I can say is that I like this look, as well as the use of brightly colored finishes, and working with brass and copper,” added Kubin who is also a practicing tattoo artist having done both for many years. Kubin started his interest with the tattoo business around 2005 during his time in the Air Force where he served as a machinist and welder.

Until recently, Kubin has been designing and developing his tattoo machines manually, then outsourcing the machining. He explained that since he has so many different machine designs with much custom work, and that they keep changing, it had become very frustrating for all involved to keep up with his evolving creativity. “So I finally decided to buy my own milling machine in order to develop my new parts exactly the way I want them, when I want them,” explained Kubin.
Kubin visited AMS in St. Louis and decided to buy their new demo machine right off the floor. “It blew me away,” added Kubin. “This machine with the G2 control allows me to do all kinds of things right in my home shop. With it now, I use it for rapid prototyping. I have the two-axis version so I am able to develop any crazy idea I have just by drawing something up in CAD and uploading a DXF file. I then tell it how deep I want to cut it, and move. I’ve been making all kinds of cool stuff! 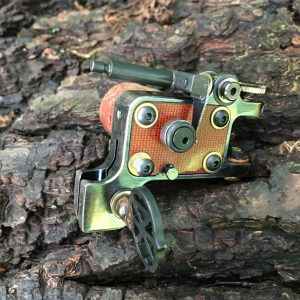 “Because of this, my new lineup of tattoo machines this coming year totally blows everything else out of the water. I’ve really been able to hone in and precisely cut out exactly what I want. And when I mess up, I can just change my program a little bit and start over easily! I still use my local machine shop for production, but this changes the prototyping procedures totally, making it much quicker, and allows for creative changes much more easily. Saving time and money for all involved!”

There are multiple features on Kubin’s new machine with the G2 that Kubin likes best, including the fact that there is a W axis as well as X, Y and Z. This allows him to move his knee up and down manipulating the W axis, and his 0 never changes. The control compensates for that, and nothing needs to be re-set.

“I also love the fact that I can easily look at the program and make modifications. This G2 control facilitates a very quick and easy way to make complex designs, including all the ideas in my head!  ACU-RITE also offers a training course that I’ll probably take as well to learn about even more of its capabilities, and expand mine!”

Translate »
We use cookies to ensure that we give you the best experience on our website. If you continue to use this site we will assume that you are happy with it.OkNo